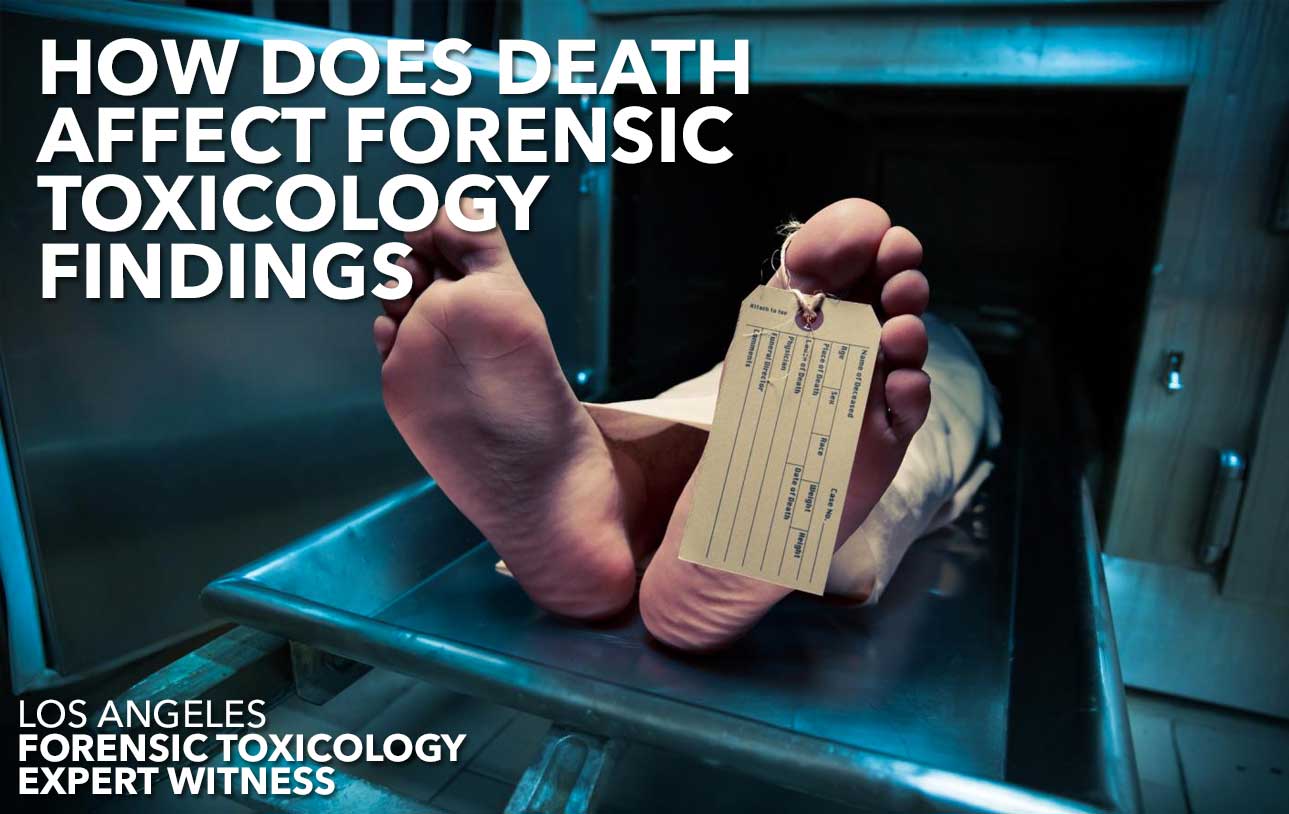 Determining what substances a person ingested, can be complicated by absorption, distribution, metabolism, and excretion (ADME). ADME describes the pharmaceutical composition within an organism. For example, opioids taken in pill form take about an hour to enter the bloodstream whereas injection of an opioid such as heroin, results in quicker absorption and consequently, a faster reaction to the substance.

In the state of California, it is required in cases of known or suspected homicide and suicide to conduct toxicology testing, particularly those cases where drugs or alcohol may have been factors in a decedent’s death.

A Case of Death

Forensic toxicology testing is also called post-mortem or tox-testing in the field. Toxicology testing may seem like a fast and efficient science in a CSI program, but in reality, the process can take weeks or even months. Tests determine what kind of drugs or other compounds are present in the body and at what level of concentration in order to determine if a dose was lethal or fatal. This process can involve several rounds of forensic testing between a medical examiner, toxicologist, and chemist. Following protocols set forth by the College of American Pathologists (CAP), tests are done for specific antibodies which detect traces of opioids, amphetamines, or alcohol in the blood, urine, or saliva of the decedent.

At the onset of an autopsy, once vital organs have been removed for examination, and the pathologist has recorded identifiers such as scars, marks, or tattoos; tissue and fluid samples are extracted from a body for further toxicology testing and analysis. Pathologists will preserve any organ where they find an abnormality. These are usually preserved in formalin, a colorless solution of formaldehyde and water. The toxicologist then tests for antibodies present in tissue and fluid samples.

In situations of drug overdose, a toxicology test, can be taken from urine or saliva. Opioids such as a heroine or oxycontin cause higher levels of dopamine to the brain, an organic chemical which functions as a neurotransmitter. The higher level of dopamine increases the sense of euphoria humans experience with eating, sleeping, or having sex. When a person has an overdose, the dopamine receptors in the medulla signal the central nervous system into respiratory depression. When an opioid level in the body gets too high, breathing is reduced to the point that it stops. This is how people addicted to heroin run the risk of accidental overdose and death.

In a wrongful death suit where suspected homicide or accidental death occurred, a person can hire what is commonly called a Toxicology Co-Counsel to support their case. Let’s create a theoretical scenario where a young person in their 20’s became estranged from their family due to drug abuse and addiction and subsequently died. The family had enough contact and knowledge to know that their relative had a relationship with a known dealer, who supplied their loved one with access to and the administration of heroin, contributing to the decedent’s death. The family could seek counsel in a wrongful death civil suit, which would not involve a prison sentence, but more likely compensatory damages. The role of the toxicology co-counsel is to analyze forensic toxicology tests of the victim and present their findings and expert testimony in court.