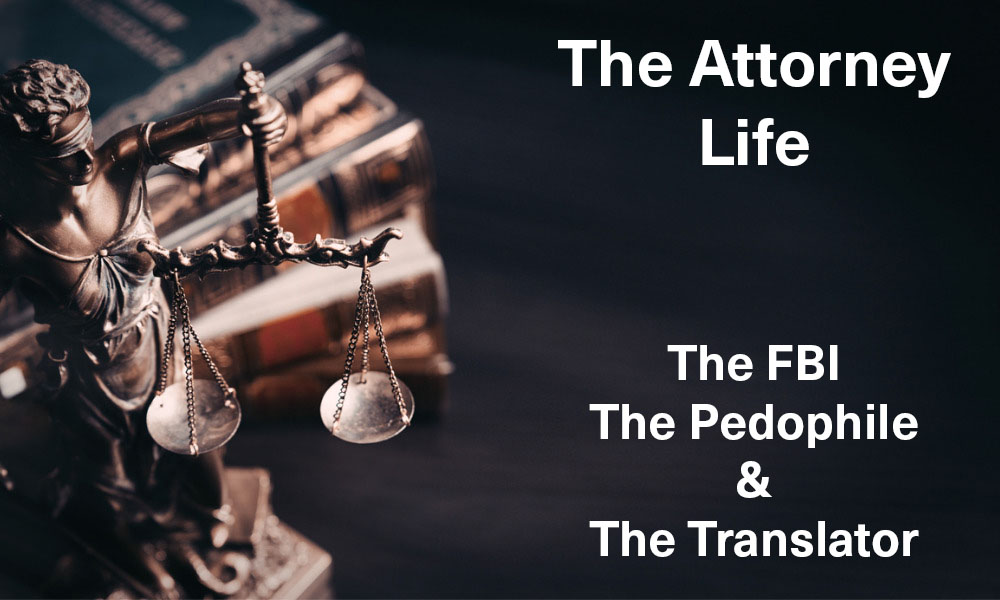 I was in my office one day and the receptionist said there was someone there to see me.  I said, “tell him that I am busy, and he needs to make an appointment.”  She calls back 30 seconds later and said “it is an FBI agent!”  I said, “how do you know that?”   She said, “I asked for ID, and he showed me his badge!” I asked what kind of case it was, and he said “its not about a case.  I need to speak with you.  I yelled

My first thought was that I was accused of something related to my web activities, but I could not place what it was.  I thought “what the hell does he want? Does he have a warrant?”  I tried hard and built up my courage for 20 minutes and went to the receptionist’s desk to meet him.  I was not letting him into my office!  I did not want him looking around my office and claiming the plain-view doctrine applies.

I walked with a feeling of anxiety, bordering on a panic attack.  It caused me to walk fast and I could not control it, so I must have seemed aggressive, which is not good for black folks when dealing with law enforcement.

When I made contact with him, I asked a series of questions and was talking very fast:

Me: Am I under arrest?

Me: Am I being detained?

Me: Do you have a duly signed warrant?

Me: You are NOT talking to me, and you are on private property, so leave quickly.  I do not even know anything about what you are here to talk about.

FBI: But I did not get a chance to tell you what I want to talk to you about.

Me:  That is irrelevant.  I don’t know anything you would ask. [Yelling] Now get the hell out!

FBI:  I am going to try and de-escalate this situation and let me put you on the phone with someone.  [He scrolls through his phone and calls someone.]

I assumed it was a supervisor he was calling.  I turned and walked away.  Then he yells, “I have your friend [name withheld] on the phone.  The name he gave is a man I went to college with, who was a groomsman at my wedding and a very close friend.  I was in shock and walked to his phone which was on speaker mode.  It was my friend that needed references so he could get a higher security clearance.  I said, “why the hell did you not tell me you gave the FBI my name and that they were going to contact me?”  You made me so anxious and upset.  Why do you do stuff like that?  He said he thought he had told me about it.

He really ran my blood pressure up over nothing….  Still hard to believe.

Editor X (I am the editor and I do not write the stories….  Again, I am just editing them)

I received a call from a close friend.  She had a high-risk pregnancy, and she was ordered to be on bed rest per her doctor.  She had a preliminary hearing the next day and needed someone to conduct the hearing. I asked what kind of case it was, and she said: “I have a sex crimes case and I really need help  Sex crimes are by no means my favorite…. But she needed me to help her as a friend.

I reviewed the file the night before the hearing very well.  This guy was sodomizing people who have severe disabilities and cannot talk.   He was a caregiver to all his victims and a registered nurse for a facility that took care of disabled people during his shift, which is where he found all of his victims!

I really didn’t want to do the case, but it was a very close friend and so important because the judge complained about her postponing the preliminary hearing for a long time.

I met with the client in the lockup and during our discussions, I just said to him, “why would you do that to anyone let alone your patients?” probably something I shouldn’t have asked if I didn’t want an answer but he went on to tell me that when he does it to people that can talk he has to kill them.  I was just anxious to get out of there and do the hearing quickly because this guy made my skin crawl.

During certain hearings, the defendant has their writing hand free and everything else is shackled.  This is because he must be able to assist the defense and he can write questions and stuff or you know make points on any issue during the hearing and the attorney generally has to listen to that feedback,

We were sitting in a courtroom, and I was cross-examining the officer who could not find his own ass with both hands, so this was going to be fun.  While I was cross-examining the officer, completely unexpectedly, I felt his hand go on my knee and started moving north. I went into panic mode and just freaked out and started hitting the guy and beating him.  The bailiffs were not interested him helping him really and the fight continued in the courtroom.  I punched him many times until the judge hit the emergency button and 10 sheriff deputies appeared in the courtroom.   I passed out because the last thing I recall is a Sheriff’s deputy was behind me and had me in a chokehold and was yelling commands.

After that I don’t recall anything other than after I came to, I was in a cell with disheveled clothes and my hands and shoes had blood on them.  I assume from punching and kicking him.

Not a fan of pedophiles and he had it coming.  The judge fined me $500 for what went on.

Editor X (I am the editor and I do not write the stories….  Again, I am just editing them)

I had a case in which I was representing a man who had been in the United States for 20 years, but only spoke Spanish so I had a translator.  I cross-examine the cops so hard you should put them in his social studies book history and I made him look like a complete fool.

I turned to my client and said [referring to the cop] “stupid motherfucker.”

Out of nowhere I heard the translator and he said the line in Spanish and he was not correct anyway so I don’t know why he yelled “estupido hijo de puta!”

I asked the translator the following: “what the hell did you translate that for? He has been in the United States for over 20 years and he knows that phrase!”

He said that he felt really bad for my client and he was just getting excited to see the cop looking terrible on that witness stand.

Editor X (I am the editor and I do not author the stories….  Again, I am just editing them)

The Attorney who was also an Expert in Forensic Toxicology in a DUI trial.

I was co-counseling with my friend in a trial in Rancho Cucamonga, CA.  Anyway, the attorney called him self as a witness and submitted a brief on the issue.  He then testified while I did his direct examination.

Editor X (I am the editor and I do not write the stories….  Again, I am just editing them).